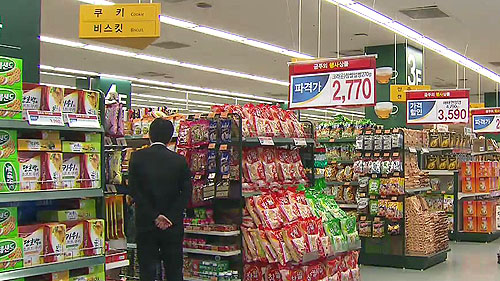 At the end of last year, the price of snacks went up, some by as much as 20%. While the size of the snack box increased as well, the contents did not. Consumers were fooled by the larger packaging. Let’s see to what extent this occurred.

Recently, we went to the market and bought some snacks that had increased in price.

The prices were pretty hefty.

I thought I’d be getting more in the bigger boxes, but when we opened them, this was not the case.

When we took the snacks out of their wrapping, and placed them back into the box, the volume had decreased such that the snacks from 7 different packages were all able to fit into one box.

The packaging is 4-5 times larger than the size of the product itself.

One could claim that the packaging helps prevent the products from being crushed.

Product Representative: Every product has a tray(the plastic packaging for plates). Would it be okay if it did end up breaking? If we simply test the excessive packaging, we would discover that this isn’t the reason for its development.

Our team of reporters brought back some snacks from the grocery store.

When we glimpse into one of the boxes, we see that there is a considerable amount of packaging.

We selected three kinds of snacks, and after redesigning the box, we repackaged the products.

We decreased the wrapping on a package of four brownies by 60%. Because of a plastic stand, the size of the large snacks also decreased by 40%.

We dropped both the smaller size package and the original package from a height of 1 meter and 20 centimeters.

For bread, no matter how small the package, the contents were fine. For cookies, in the original packaging, two cookies broke, and in the repackaged box, three cookies broke.

Thus, there doesn’t seem to be a positive correlation between the size of the packaging and the preservation of the contents.

Park Su Il, Associate Professor of Packaging at Yonsei University: One side doesn’t have it, if you only pad this side, it’s hard to see the effects of padding it. Just think of it as a marketing strategy.

The university students had a relatively different response to the relation between size of packaging and price.

Let’s say the price of a big box and small box are 3,000 won. Anyone who thinks this is the right price point, raise your hand.

The students were later shocked to discover that the contents of the packages were exactly the same.

Jeong Ji Won, student from Incheon University: Would you buy this smaller package for 3,000 won? No.

It seems that consumers are fooled by the larger packaging.

Lee Young Ae, Professor of Consumer Studies at Incheon University: Some people think that the price is reasonable for packaging that is larger and looks nicer. You can say that it’s a way to fool the consumer.

Domestic companies are neglecting to improve the dissatisfaction rate over excessive packaging while continuing to increase prices. Consumers are shifting towards imported snacks, and in the last month alone, the sales of imported snacks jumped by 30%.

If you bite into those snacks, it seems your teeth will be broken.

When I was young, Pringles were expensive, but now they’re actually cheaper. It’s an inconvenient truth.

The nitrogen I bought came with snacks?

Foreign snacks are not packaged excessively, but make it all the way to Korea in one piece, which is why they manage to sell a lot. haha Snack companies should stop tricking people and learn to reduce excessive packaging while keeping the product in one piece. Of course I’m not sure if you will do it! keke Because they want to save the materials for these snacks.

Buy the Chocolate Tintin. I tore off the packaging, and it was the first time I ever thought about killing someone.