After setting up an unauthorized oriental medicine clinic, a man in his eighties is suspended for repeatedly sexually harassing female nurses in their twenties.

On January 24th, the Seoul Central District Court sentenced 80-year-old Seo to eight months in prison with a two-year suspension, and a fine of 1 million won for sexually harassing his female nurses while he was practicing acupuncture. 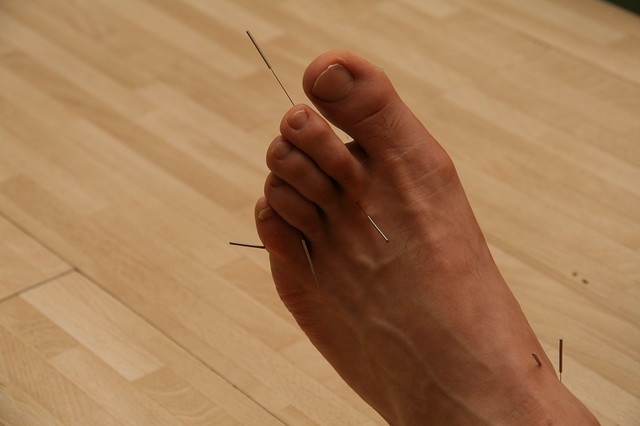 Acupuncture needles are placed into the foot to treat health problems.

After acquiring an oriental doctor license in 1961, Seo set up an oriental medicine clinic in Seoul’s Dongdaemun District in 2009 without permission from the authorities, which brought in average monthly revenue ranging from 3 to 4 million won. Seo would grab the breasts of 20-year-old ‘A’ who has been a nurse since 2012 or demand a kiss saying, “I will give you acupuncture that is good for your liver.”

Seo is also accused of taking off A’s panties and molesting her after paralyzing her with acupuncture needles in the foot, he got access to A after promising to treat her uterus. Anther victim80-Year-Old Man Paralyzes Women with Acupuncture, Molests Them ‘B,’ a 22-year-old employee, was also molested after receiving paralyzing acupuncture from Seo. The 80-year-old doctor is charged with six cases of sexual harassment.

Seo claims, “I made physical contact with them for purely therapeutic purposes, and had no intention of sexual harassment. The employees approached me and kissed me or took off their panties to ask me to examine their uterus.” His claim was dismissed by the court.

I want to slap him across the face 80 times. An old man running wild.

Does the old man really think that people buy his flimsy excuse that the 20-something nurses jumped at him undressed?

As the saying goes, as long as a man has enough strength to lift a spoon he will be on the prowl… ke.

Shit! I thought paralysis acupuncture was only possible in movies. Disgusting, tsk tsk.

Crimes by professionals like prosecutors, court judges, lawyers, oriental doctors and doctors are on the rise. The penalty for the 80 year old doctor shows how weak the punishment is. A fine of 1 million? Bastards!

How could he get a suspended sentence?

How lenient the court is! The clemency explains why this kind of sexual harassment happens again and again. As the parent of a daughter, I want the law to specify harsher punishment for sexual offenders.

The way justice is served under the law is fucked up. A man who only put his foot beneath a toilet stall in the women’s restroom got a fine of 1 million won. That bastard doctor was just fined 1 million won for taking advantage of his job to sexually abuse women. The court judges should be drowned in the Han River for their unfair application of the law.

I strongly recommend he be the doctor for the Blue House.